Nice to meet you!

Nice to meet you!

Iio Jozo is a vinegar brewery founded in 1893. We are based in Miyazu, Kyoto Prefecture.
Our vinegar manufacturing process dates back 130 years. Our current owner, Akihiro Iio, is the fifth generation, in a long line of vinegar producers.

Have you ever heard of Miyazu? It is a town facing Wakasa Bay on the Sea of Japan. Miyazu is famous for its delicious fish. It is also where you will find Amanohashidate, one of Japan’s top three scenic spots.

“Wait, there's a sea in Kyoto?” People are often surprised. Actually, it takes about two hours by train from Kyoto Station to Miyazu. It is a peaceful and tranquil country town surrounded by mountains and sea.

The town boasts clean water, fertile soil, and the large variation in temperature from day to night. This land produces excellent rice and, in turn, vinegar of the highest quality. Miyazu City is located at the base of the Tango Peninsula in Kyoto Prefecture.
Amanohashidate is about a 15-minute drive from our brewery.

The best vinegar that is tasty and safe...

The best vinegar that is tasty and safe...

Food is the most important factor in human life. So, we want to provide the best vinegar that is both tasty and safe. With this as a core aim, we even make pesticide-free rice as our raw material. Using this rice, our master brewer makes Sumoto-moromi (SAKE) in our own brewery, and from this Sumoto-moromi (SAKE), we make vinegar. This is a process we have used successfully since the company’s foundation. The fourth and the fifth generations and our vinegar brewers. 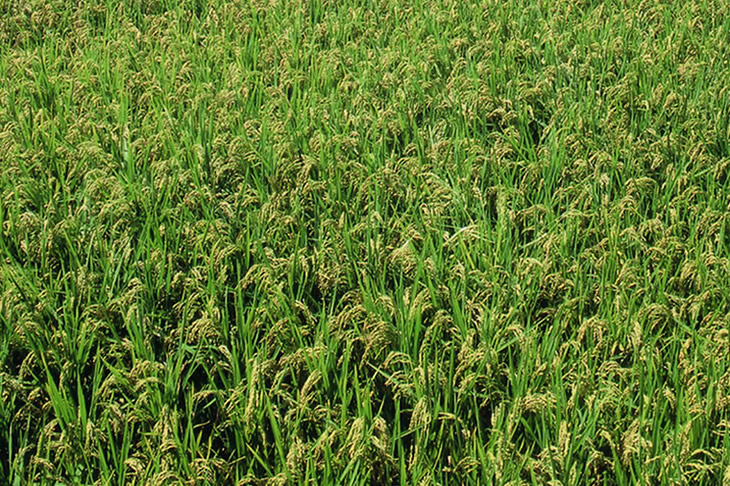 We use plenty of fresh pesticide-free rice to produce our vinegar. 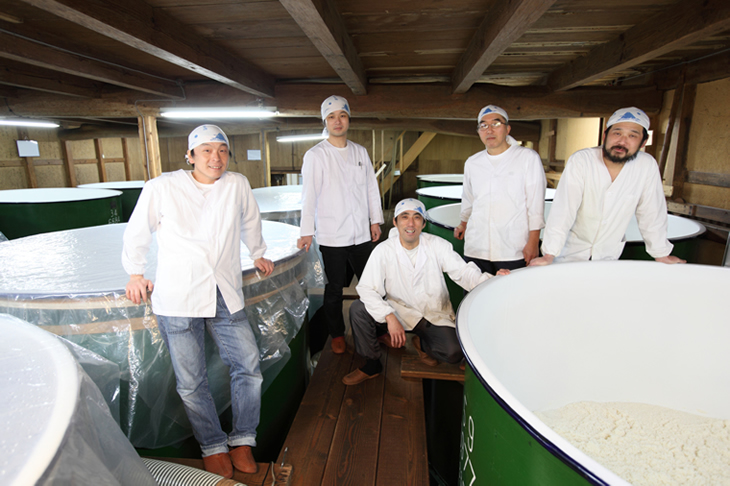 Our master SAKE brewer and his team 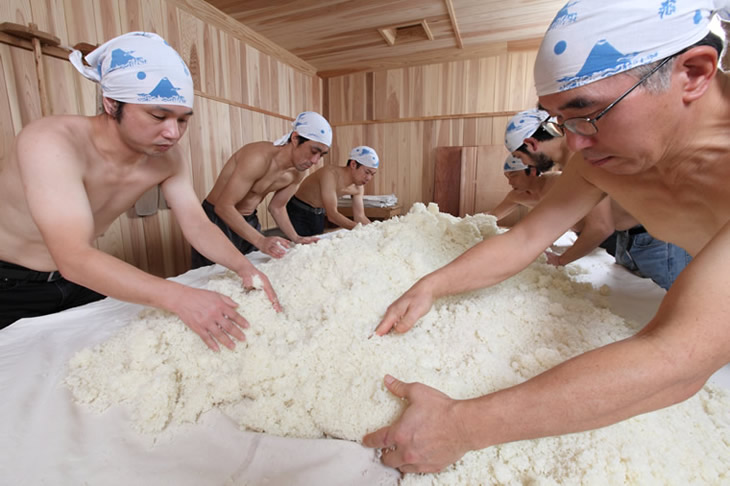 We spread malt bacteria on the steamed rice to make rice malt. 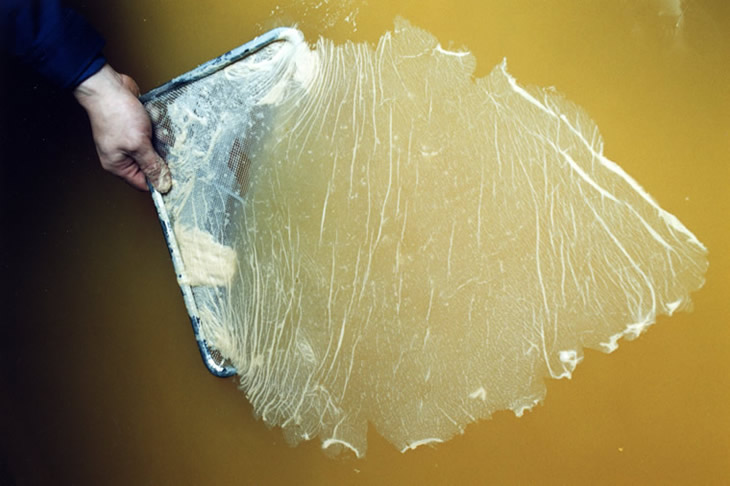 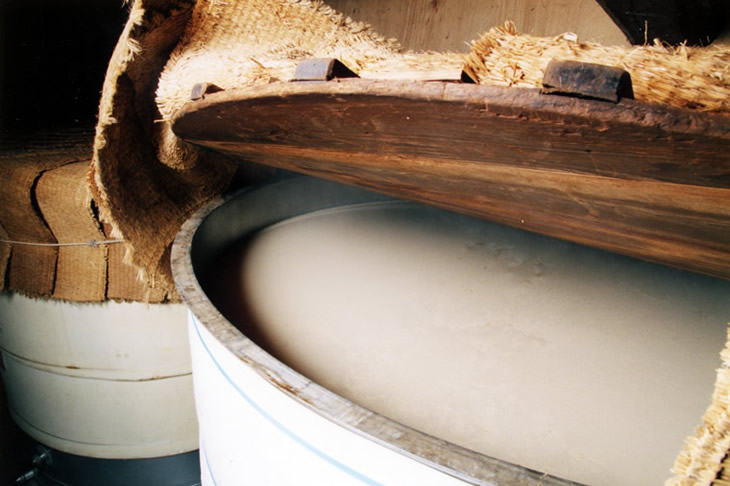 Fermentation takes over 100 days, using the classical "static fermentation" method. After that, the mixture is carefully placed in a maturing warehouse for a period of 300 days. 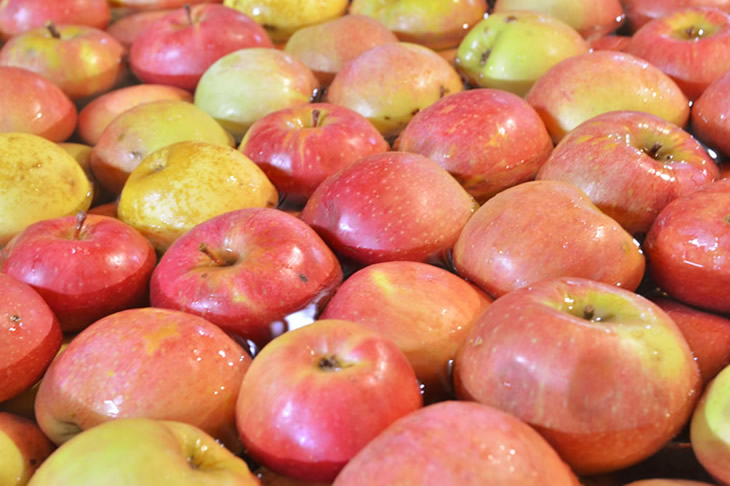 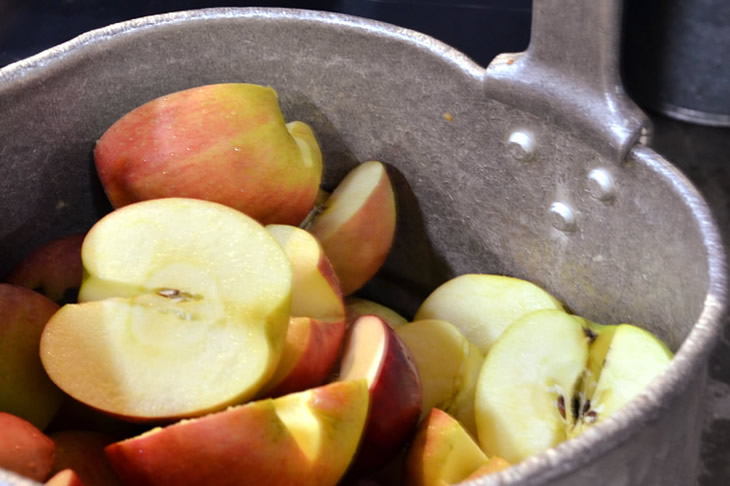 We cut apples in half and remove the stems. These apples are turned to Nigori Ringosu. 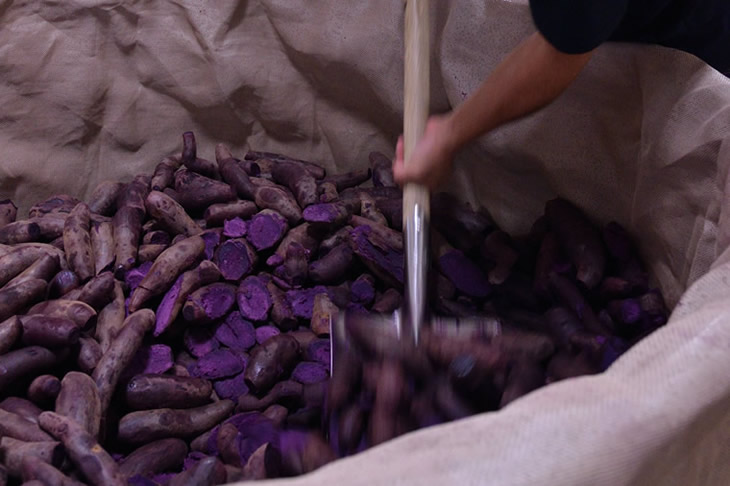 We grind steamed red potatoes and turn them to moromi. It takes the combined, concerted effort of 4 brewers to squeeze the bag of moromi. The traditional Shiboribune (Press squeezer) is still in use today. 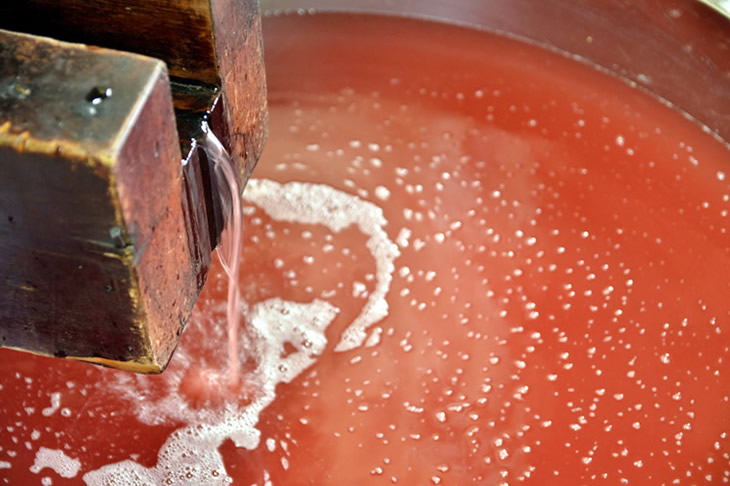 Squeezed fig moromi has a bright color and an enticing aroma.

1. We use only fresh, pesticide-free rice as our raw material. As much as 200g of rice is used for each liter of Fujisu.

The best rice produces the finest vinegar. This is our philosophy. Since 1964, we have manufactured vinegar only from the fresh pesticide-free rice grown in terraced paddy fields in Miyazu, Kyoto. We chose terraced paddy fields in remote mountains, where farming is difficult, in order to avoid contamination from domestic wastewater and pesticides used in the surrounding area.

Junmai Fujisu is a pure rice vinegar made from only rice and water. For every liter of vinegar, 200g of rice is used, which is five times the amount required by JAS, the industrial standard in Japan. For "Pure rice vinegar Premium", we use even more rice, 320g per liter, eight times the amount required by JAS. The vinegar made with more rice is not only sour, but richer in flavor.

In order to make vinegar from rice alone, at least 120g of rice is needed for 1 liter of vinegar. However, JAS permits containing at least 40g of rice per liter to call itself “rice vinegar”. Brewing alcohol and various grains are often added to make up for this gap. This standard emerged during the postwar period, when imitation foods led to widespread confusion.

2. Sumoto-moromi (SAKE) is also made by our master brewer in our brewery

Every winter, our master brewer makes Sumoto-moromi (SAKE). The process starts with making rice malt, followed by the Shubo (yeast starter), and then moromi (SAKE). Our staff stay at the brewery during these processes. In total, it all takes about 100 days. The resulting Sumoto-moromi (SAKE) is rich in amino acids. This is the key to the flavor of the vinegar.

Nowadays, it is rare to find a vinegar manufacturer that makes its own Sumoto-moromi (SAKE) in its own brewery.

3. We make vinegar using the "old-fashioned static fermentation method". We believe it’s worth the extra time and effort that this takes.

We turn Sumoto-moromi (SAKE) to vinegar using the "static fermentation method". In this method, we wait for the acetic acid bacteria to naturally ferment on the surface of the tank. This fermentation process alone takes about 100 days, but we can limit the loss of amino acid and make milder vinegar in this way.

Fujisu is made with a generous amount of tasty, pesticide-free rice. Nurtured for a long time in a static fermentation process, it is both sour and mild. It has the mellow aroma of rice, and a rich flavor.

A scientific analysis shows that Fujisu has a low ratio of acetic acid. Acetic acid is an organic acid with a strong sour taste and pungent odor. It is a volatile acid that evaporates easily. In ordinary rice vinegar, acetic acid accounts for 99%, but in Fujisu the ratio of acetic acid is only 86%. Fujisu contains a lot of mild acids (non-volatile acids) such as lactic acid, succinic acid and malic acid. It does not have pungent aroma but retains the sour taste. This lasting good taste can be enjoyed in Sushi rice. 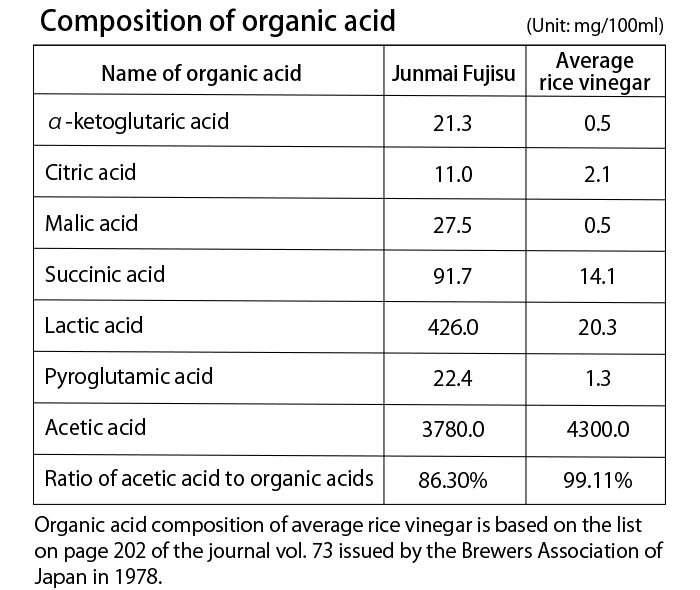 Fruit vinegar made in Fujisu spirit

Fruit vinegar made in Fujisu spirit

Iio Jozo also produces vinegar from a variety of ingredients other than rice. Fruit vinegar, such as Purple sweet potato vinegar(Plane) and Nigori Ringosu, is made following the same concept as Fujisu. The process of making the best vinegar that is tasty and safe begins with the careful selection of raw materials. For example, we use domestic beniimo (red potatoes) made without using pesticides for Purple sweet potato vinegar(Plane), and naturally grown apples (Mr. Akinori Kimura's "Miracle Apples") from Aomori for Nigori Ringosu.
The process of making fruit vinegar is similar to that of rice vinegar. We make moromi (SAKE) from raw materials and turn it into vinegar using the static fermentation method. The process of making moromi differs according to the raw materials used. Almost the entire process is carried out by hand, by our own brewers.
After moromi (SAKE) is completed, it is turned into vinegar through static fermentation. Vinegar made from whole fruits and vegetables not only has the taste and aroma of the raw materials, but is also rich in natural ingredients. We do not simply use the highest quality of raw materials, but we also use them in abundance. This is the spirit of Fujisu.

Our products are never mass-produced. We stick to production of the best vinegar through the selection of the best raw materials and carefully following our own, elaborate process. Iio Jozo is a small brewery, but we are immensely proud of what we do.

We hope you will enjoy the taste of Fujisu, produced sincerely by the farmers, master brewers, and staff at Iio Jozo.